Skip to content
Date: August 31, 2012Author: Making the Most of Notation Software 4 Comments

When you type in chord symbols in Sibelius , they do not play back by default.  However, you can use a plug-in to realize the chords for playback and printing.

For example, let’s take the lead sheet of the folk song Scarborough Fair. The melody and chords have been entered. When you press play in Sibelius only the melody plays back.

Click to hear the audio playback of the above file,

If you want to realize chords for playback, follow these steps. The plug-in will create new staves and use the existing chords to create the staff. The new staff will then playback.

Make some choices from the Plug-in window. I usually go with one chord per chord symbol for just a basic playback.

Here is what the plug-in produced: 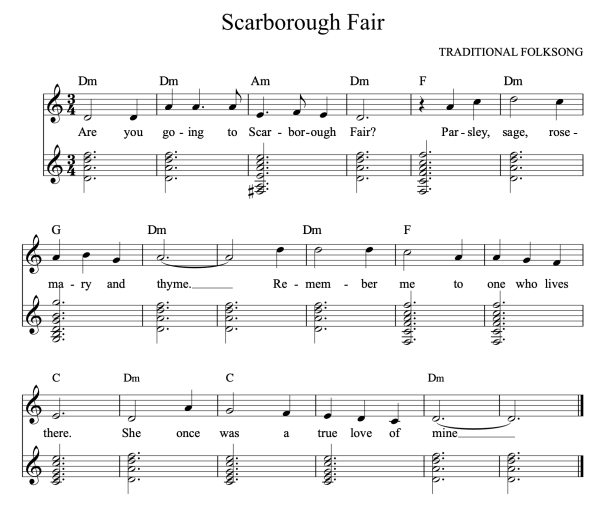 Playback of the above file with the realized chords.

Other Plug-in Instruments and Styles

You can experiment with other options such as changing the instrument to piano and/or changing how the realized chord symbols behave:  Chord every beat, Chords follow score rhythm, 8th note Alberti and others.

After you have realized the chord symbols, you can also hide the staves created by the plug-in so they are not seen on the monitor or printed out.  Here is how it works:

TIP:  Sometimes when you add plug-ins in Sibelius if there has been layout formatting, the staves will over lap. To remove the formatting:

Dr. Tom Rudolph is an adjunct instructor for Berklee College of Music Online School, The University of the Arts, Central Connecticut State University, VanderCook MECA, and the Rutgers Mason Gross School of Music. He has authored multiple online courses in music technology and music history. His books include: "The Musical iPad", "The iPad in The Music Studio", "Finale An Easy Guide to Music Notation (Third Edition)", "Sibelius: A Comprehensive Guide to Sibelius Music Notation Software (Second Edition)", "Teaching Music With Technology (Second Edition)", "Recording in the Digital World", "YouTube in Music Education" and "Finding Funds for Music Technology". He was one of 4 co-authors of the TI:ME publication: "Technology Strategies for Music Education". Rudolph is the co-author of the "Alfred Music Tech Series" that includes: Playing Keyboard, Music Production and MIDI Sequencing, and Composing with Notation Software. He has published many articles on music technology that have appeared in the Music Educators Journal, The Instrumentalist, and Downbeat magazine